Things are boring because everything seems the same! The well drilling truck is still sitting there. He drilled for a few hours over 2 days. Then had a vacation planned. Geez, doesn’t he know I’m dying for some progress here?! So hopefully today or tomorrow we’ll hit water and be done with that. Until I have to see the bill and write the check, scary.

Kyle finally finished the drawings and gave me the OK to have copies made. So I’m doing that today so we can get copies to the Truss company. Also, pass a copy on so we can get the permits started. September sounds like its going to be super expensive. Our house has turned out a little bigger than we planned. Which means more $$.  We talked about it and feel that there’s nothing we want to change, and if thats the sqft it came out to be, well we will just bite the bullet and do it. Grand total:4054 sqft. The main level is 3092 sqft and the bonus room is 962 sqft. We will most likely build with the bonus unfisished at first. Saves money in the permit process and when the county assess the hosue for taxes purposes. Then we’ll finsih the bonus room after we move in, if we have any money left! 🙂

As far as life goes on the Camus compound its been busy. Ellie has cheer M T and Th. So we aren’t home until 8.  I had book club Tuesday night, love catching up with the girls. Our book this month was The Vactioners. It was a quick light read. We had a breif discussion about it, but we are really bad at staying focused and end up discussing personal stories that relate…which I love.

Thursday was a fun day. Ellie and I both got to go to the salon and get haircuts. A little bonding time. Then we came home and I was asking Sue how her interview went (interviewed for a new para job at another elementary school). Of course she was saying “I don’t know, it was weird and akward. I don’t know what they thought” blah blah blah. As she’s telling me all this, the phone rings, and shes like “its the school!!” They offered her the job of course. She was so funny, jumping and sqealing. So we congratulated her and ran out the door for Ellie to go cheer at a scrimmage match.

Saturday was Kyle and I’s 11 year wedding anniversary, and honestly we did nothing. He was sweet and told me “happy anniversary” about 20 times. It was just too crazy to plan something. He had 2-a-day football practice, I had to go to a cousins bridal shower. So I’ll just save that “did nothing” in my back pocket for something.

Sunday was a fun and busy day. We woke up early that morning. Ellie asked “what day is it?” I replied Sunday, so shes asks “why do I have to be up so early?!” Cheer Ellie, always cheer. Sunday was the league’s jamboree. And Ellie was schedule to cheer at 9, but we had to be there at 8.  So we scrambled and ran out the door. We spent the morning watching her, then hit Costco for some dog food. I got out of there only spending $45! That never happens. Must have been because Kyle was with me.

We went home for the day and I spent a few hours cleaning Ellie’s closet and drawers. We are going school shopping Friday and I needed to see what still fits and what does she really need. Kyle and my BIL Josh began the process outside of pressing apples to make hard apple cider. This was an all day process of course. But they enjoyed it. It is so messy, and luckily the bees weren’t out really. Papa Ron waited for high tide then took the kiddos out on the boat to go set out a crab pot. They weren’t sure what to think of that and got on the boat reluctantly. They were gone about 2 hours and came back with huge smiles on their faces. They caught 12 crabs! They thought that was so cool. 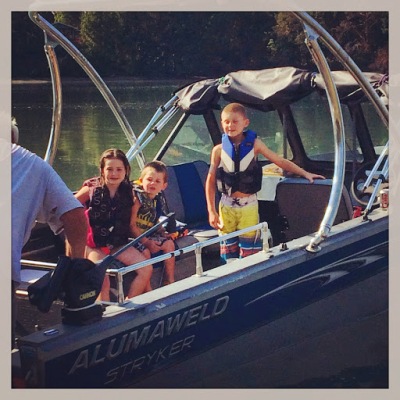 We ended the weekend tired but lots of fun times. My goal this week house wise is to 1) get copies made; 2) get new bid for windows- since the house has changed from the last bid. 3) stay on top of kyle to get permits started! 4) get some water in that well. 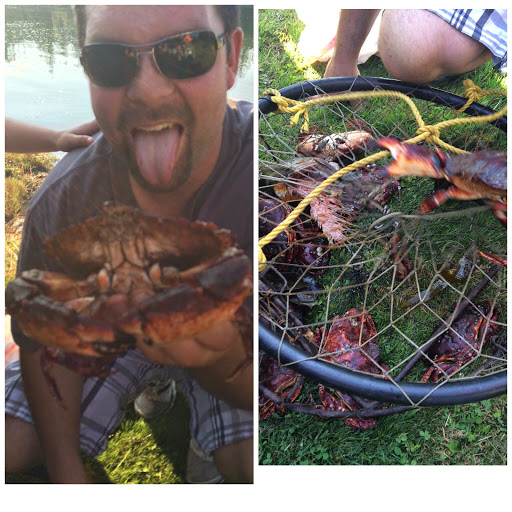 2 thoughts on “2 months! and still boring”